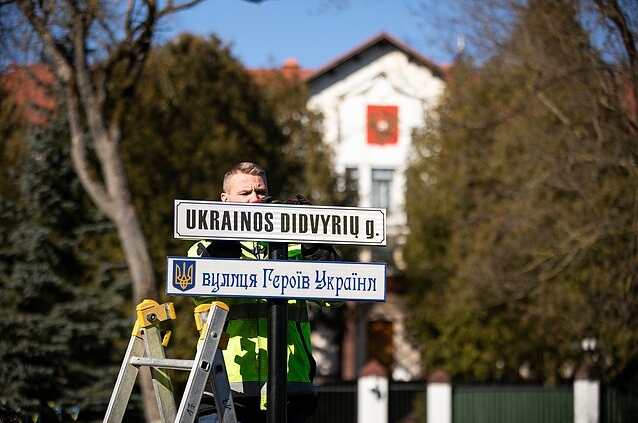 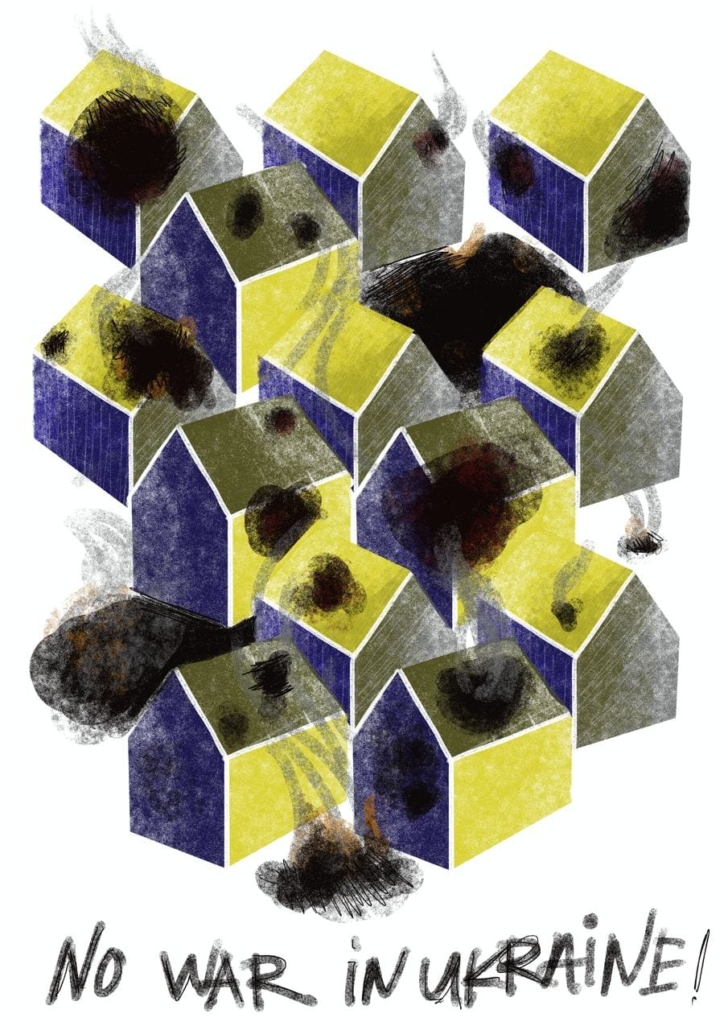 or How to talk about the war in Ukraine

It is important to call what is happening in Ukraine now in accordance with what the Russian Federation and Russian troops are doing on the territory of Ukraine in essence, with no looking for euphemisms. How else, if not a crime and terror, can be called a cruel shelling of a hospital in Mariupol, where there were women in labor. Or the blockade of Mariupol by the Russian military and the obstruction of the humanitarian corridor and the evacuation of civilians: the city has been without water, heat, communications almost two weeks, people are hiding in bomb shelters, there is a lack of food and water; today 300,000 people remain in Mariupol in a danger; 1582 citizens have already died, among them a child who died of dehydration.

Mariupol today in a video by Ukrainian Witness, the chronicle of the Ukrainian resistance to Russian aggression. 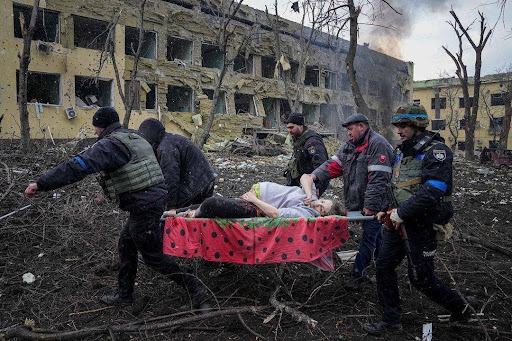 How else can it be called, when Russian troops systematically shell evacuation corridors for peasants. When the aggressor has ruined over 200 schools, several dozen healthcare institutions, 8 churches, 1600 residential houses in Ukraine via aviashells. Turned Ukrainian cities into devastations — in Kharkiv 470 buildings were completely destroyed. 2 million Ukrainians have left their cities — the homes and lives of thousands of people have been blasted. Or the power outage of the Russian occupiers of the Chernobyl nuclear power plant, which poses additional threats to the safety of such a facility.

That’s why a lot of Government institutions, diplomatic organizations as well as intellectual community in UA and abroad are working to convey to audiences around the world the truth about war in Ukraine, especially its preconditions, taking into account the historical context, explaining Russia’s actions against Ukrainian sovereignty and culture in previous decades or even centuries.

Here is a short guide prepared by the Ukrainian Institute on how to talk about the war in Ukraine so that you can be heard and authentic. 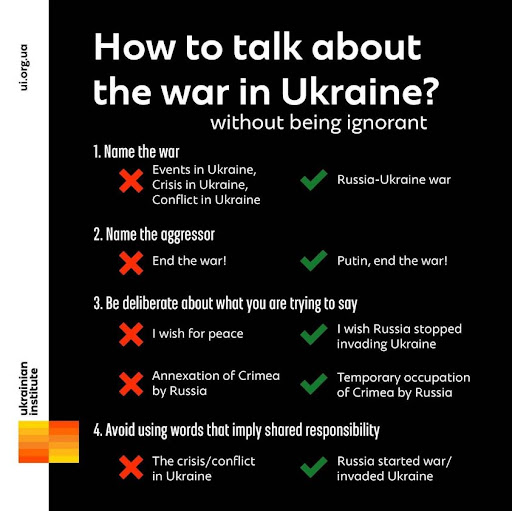 On March 10 the group of prosecutors from the International Criminal Court in The Hague arrived in Poland to collect evidence of Russian crimes in Ukraine among Ukrainian refugees. This was emphasized by Polish President Andrzej Duda during a joint press conference in Warsaw with US Vice President Camilla Harris. Poland provides everything the ICC Group needs to provide important work.

The President of the Republic of Poland noted that refugees from Ukraine were arriving in Poland, people who had witnessed the destruction of their homes, the killing of neighbors, the bombing of hospitals, and the shooting of civilians and children. Evidence of these crimes of Russians is available inside hundreds and thousands of smartphones of refugees.

“There is a lot of evidence, especially in the form of videos. It’s all going. This work is already underway and I believe that it will result in indictments. I believe that this will lead to the condemnation of war criminals of this war in Ukraine as a result of a gangster attack by Russia,” Duda said.

Meanwhile Karim Khan – the chief prosecutor of the International Criminal Court – announced that he is seeking arrest warrants for three men suspected of committing war crimes during the 2008 Russian-Georgian War, who served in the governments of the Russian-backed self-declared republic of South Ossetia.

The Hague-based court opened an investigation into the conflict, which killed hundreds and left thousands of civilians displaced, in 2016. Russia invaded Georgia after violence broke out between separatist groups and Georgian forces. In 2021, the European Court of Human Rights concluded that “grave human rights abuses” occurred on Russian-held territory. Khan noted that his office’s actual investigation into Ukraine since 2014 had turned up similar “patterns” and called on all parties in the ongoing conflict there to respect international humanitarian law.

Ukraine is a member of UNESCO Creative Cities Network, as we have 2 Cities of Literature – Lviv and Odessa and City of Music – Kharkiv.

As a Creative Cities we work together to strengthen cultural and social connection, create common senses and spaces for creativity and, amongst others, share a common vision on how important freedom of speech and self expression is. All together, we are working on sustainable development goals. All these factors are impossible to recreate and develop in Ukraine now, unfortunately. In Southern cities we can’t speak even of normal life like eating and sleeping in beds, needless to say about any creativity or sustainability.

For years we are working all together, creating projects, meeting each other at Annual Conferences and Meetings and just being friends. So obviously Cities of Literature are supporting Ukraine, showing solidarity within protests, sanctions and other actions.

On Wednesday, the Council of Vilnius has decided to name a road section leading to the Russian Embassy, hitherto nameless, Ukraine Heroes Street.

“As of today, the business card of every Russian Embassy employee will bear a tribute to the combativeness of Ukraine and everyone writing down the street address will have to think about the cruelty of the Russian regime against the peaceful Ukrainian people,”  Remigijus Šimašius – Vilius City Major said on Wednesday. 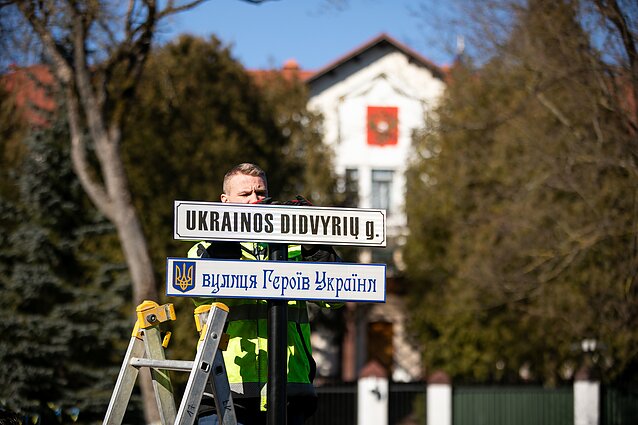 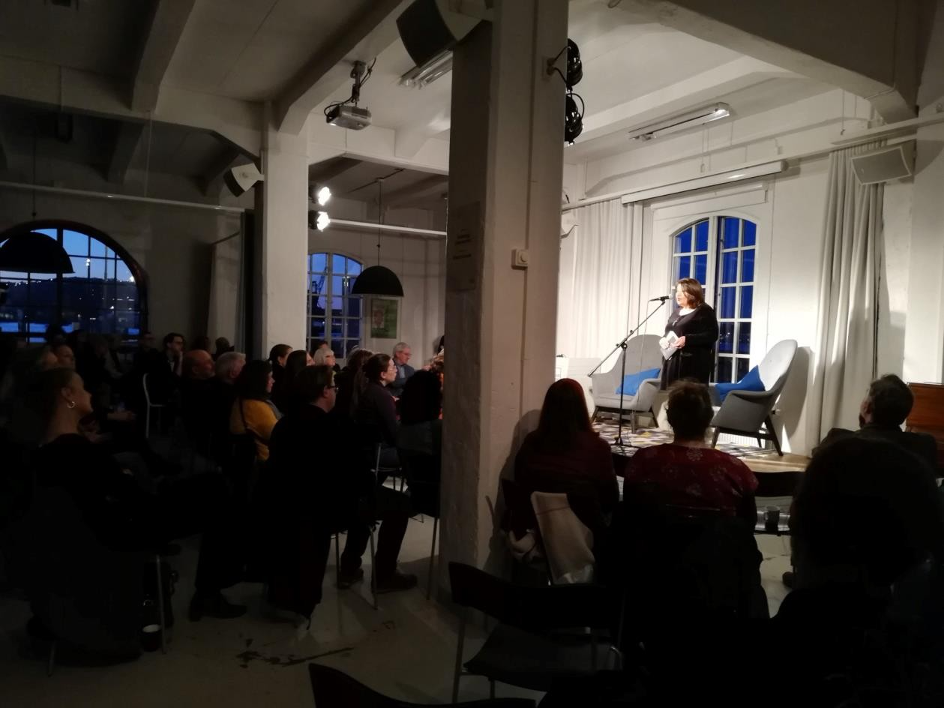 The poet Jila Mossaed, Chair no. 15 in the Swedish Academy, in Readings for Ukraine Photo Sofia Gräsberg

Swedish Speaker of the Riksdag, read Ija Kiva at a literary summit organized by main partners in Gothenburg Unesco City of Literature.

“In these very serious times, we see how cultural heritage, literature, can become a target in war. Part of warfare can be the suppression of another country’s literature and cultural heritage”, – Andreas Norlén concludes his greeting with a poem by the Ukrainian poet Ija Kiva. She wrote the poem, he tells us, on 29 August 2014 when 366 Ukrainian soldiers were killed and the tragedy in Ukraine began.

Here is a country. It remembers Chernobyl, the Holodomor,

And the enormous line for a permanently closed kiosk.

Manchester is to suspend a “friendship agreement” with St Petersburg following the Russian invasion of Ukraine it has been confirmed.

It comes as the city’s Ukrainian community urged civic leaders to scrap the link in protest at Vladimir Putin’s “barbaric military assault” and instead enter a twinning arrangement with a Ukrainian city. The partnership with St Petersburg is Manchester’s “oldest formal link” according to the city council’s website, and dates back to a friendship agreement signed in 1962, “with a strong focus on cultural exchange throughout the relationship.”

However, ahead of a huge solidarity rally in Piccadilly Gardens this afternoon, the Association of Ukrainians in Great Britain called on Manchester to break all ties with Russia. Martyn Chymera, Director of the organization, who lives in Stoneclough near Bolton said: “Glasgow were twinned with Rostov-on-Don and they suspended that yesterday”. Source: Manchester News 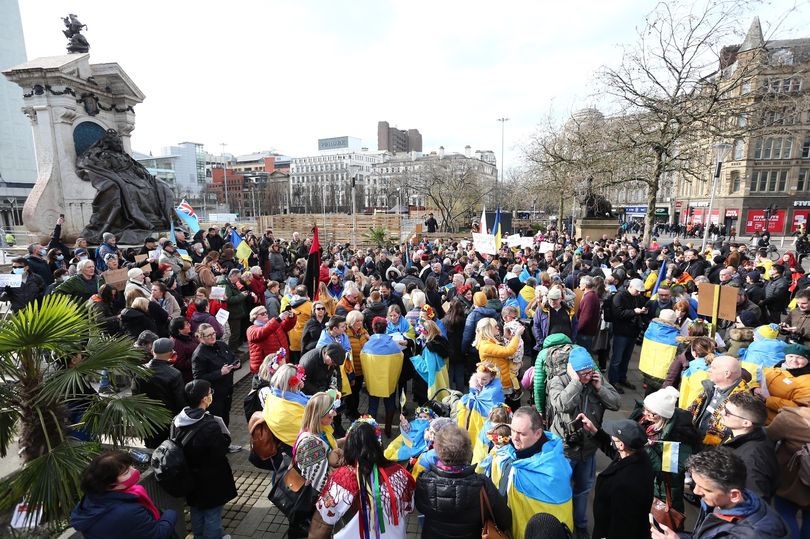 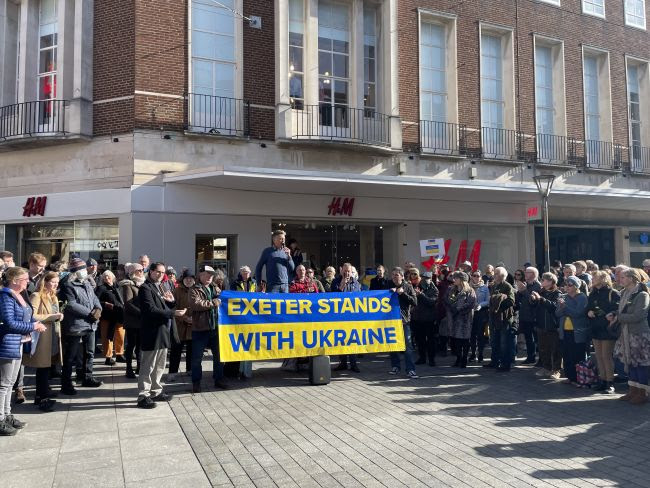 The facts about the war in Ukraine

You can find information in different languages on these resources:

You can check the information and learn about common Russian fakes and manipulations here: 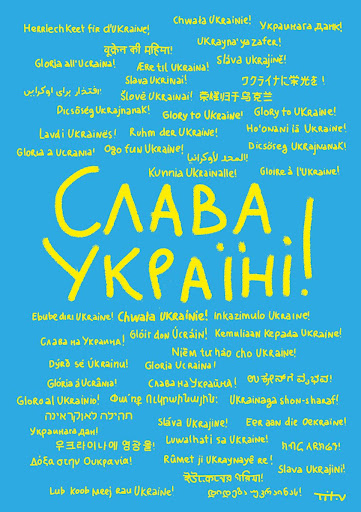