We, the representatives of the cultural community of Lviv (CultureHeadquarters), receive a lot of supportive letters addressed both to us personally and Ukrainian people! From the USA to Australia, from Israel to Great Britain – all around the world we see the mass protests against Russian invasion of Ukraine and killing Ukrainians! Thank you for your support – words, finances, humanitarian aid, spreading of information.

As well, we receive dozens of questions from different countries – so we launch a regular digest on the current situation in Ukraine, ways how to help Ukrainians, the world’s positions on Russia’s war against Ukraine. It’s not the “russian-ukrainian conflict” (as some world media define) – it’s a Russian aggression (with the support of the self-proclaimed President of Belarus), Russian war against Ukraine as a sovereign, independent democratic state.

How you can help Ukraine and a future

The National Bank of Ukraine (NBU) opened a special fundraising account to support the Armed Forces of Ukraine. The number of the special account: UA843000010000000047330992708. This account accepts multiple currencies. It has been established and opened to receive transfers from international partners and donors in both foreign currency (U.S. dollars, euros, UK pounds) and hryvnias. You can find details on NBU web-site.

You can help Ukraine in different ways: to donate, to influence authorities directly, to sign the petition, to join a protest, to help Ukrainian refugees, to ban Russian propaganda. Here is!

The current situation in Ukraine

According to official information, the intervention of Russian troops on the territory of Ukraine led to the following consequences:

As of February 26, 352 Ukrainians, including 14 children (in Chuhuiv, Kharkiv region; Oleshky, Kherson region), had died from the hands of Russian invaders. 1,684 people have been injured, 116 children among them, informed the Ministry of Health of Ukraine. Today morning, February 26, a family with two civilians and their daughter were shot in Kyiv – a capital of freeedom, like someone titled the city.

The United Nations has estimated that about 100,000 Ukrainians have already been displaced as a result of the Russian invasion, and that number could ultimately grow to 1 to 5 million. Receiving countries include Poland, which is planning to accommodate up to 1 million Ukrainians, as well as Romania, Hungary, Slovakia, and Moldova.

On February 27th Russian air forces destroyed the Mriia “Dream” – biggest transport plane in the world by now (AN-225), made in Ukraine. This happened during another air attack in Bucha, Kyiv district. “Russia aimed Mriia (“Dream”) as a symbol of Ukrainian Aviation power. AN-225 is an aviation giant, recorded as a maximum capacity plane as well as the longest and heaviest cargo flights ever made”.

Ukrainian lawyers identify and gather the facts of International Humanitarian Law violation: Civilian lives and civilian infrastructure must be protected and safeguarded at all times. The violence must be condemned by the world community, and criminals – representatives of the Russian state, who started the war against Ukraine – are punished by an international tribunal.

Today Ukraine has filed a lawsuit against Russia in the UN International Court of Justice in The Hague. “Ukraine has submitted its application against Russia to the ICJ. Russia must be held accountable for manipulating the notion of genocide to justify aggression. We request an urgent decision ordering Russia to stop military activity now and expect trials to start next week,” said Volodymyr Zelenskyy, the President of Ukraine.

The war has affected each and every part of Ukraine – even the westest. We are writing to you from Lviv, which is now the biggest center to help refugees – for now we have welcomed more than 30 000 people. But still, we are worried here as well. Alert sirens woke us up yesterday and the day before. Civilians help police by signing into territory defense, we volunteer, prepare Molotov’s cocktails and self-organize whole districts or neighborhoods – these times defense is everyone’s business. In unity is our strength and we are ready as never before! 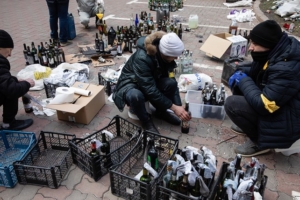 More information about a situation in Ukraine

You can check the information and learn about common fakes and manipulations that Russia throws into the information space of Ukraine on the websites of fact-checking organizations:

Voices of the world

David Lynch, Film Director:  If I could say something to Mr. President Putin, we are, as human beings, charged as to how we treat our fellow man. And there is a law of nature, a hard and fast law. There’s no loopholes, there’s no escaping it, and this law is: What you sow, you shall reap. And right now, Mr. Putin, you are sowing death and destruction, and it’s all on you.”

Lynch continued, “The Ukrainians didn’t attack your country. You went in and attacked their country. And all this death and destruction is going to come back and visit you.” (Source: IndieWire.com).

Andriy Kurkov, Writer: Well, my only hope is that the world finds a way to stop Putin and to leave Ukraine in peace because his goal is to destroy the country and to destroy Ukrainian independence. And if it happens, then half of the country will leave to Europe — they’ll be immigrants or refugees — and everything that will remain will be destroyed by the Russians who’ll behave like Bolsheviks in 1919. (Source: New York Times).

Pope Francisco:  The Pope appealed “to those with political responsibility to examine their consciences seriously before God, who is the God of peace and not of war.” And he called on believers and non-believers alike to unite in a joint supplication for peace next 2 March, Ash Wednesday, by praying and fasting. “Jesus taught us that the diabolical senselessness of violence is answered with God’s weapons, with prayer and fasting,” the Pontiff said. “I invite everyone to make next 2 March, Ash Wednesday, a Day of Fasting for Peace. I encourage believers in a special way to dedicate themselves intensely to prayer and fasting on that day. May the Queen of Peace preserve the world from the madness of war.” (Vatican News)