You are here: Home / News / #standwithukraine / War is on our calendar 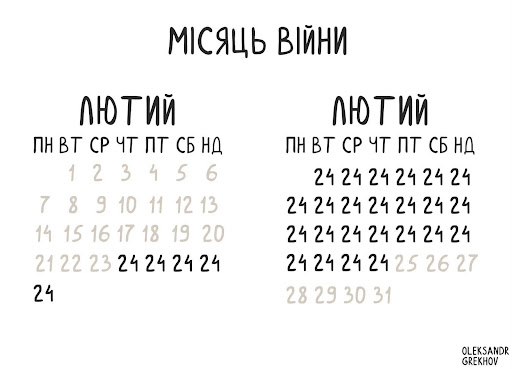 A month since Russia attacked Ukraine. Human psychology works in a way that we’re getting used to, adapting to the situation, whatever it may be, protective mechanisms are activating. The case of the first civilian deaths, pictures of the first civilian house shelling and destruction by Russian were a shock to all of us. Then the avalanche of new and terrible reality only grew.

There are hundreds of civilians killed in Ukraine. In Ukraine, there are cases of executions, kidnappings, rapes, threats, looting by the Russian military, as well as the deportation of Ukrainian citizens to Russia. In some cities it is impossible to bury the dead because of ongoing shelling; someone buries their relatives in the backyards, in parks… More than 3 million refugees and millions of displaced people inside Ukraine – these people have had to leave their homes, they are homeless in fact. More than half of Ukrainian children do not live at home. Thousands of Ukrainian children live in shelters and basements. 135 children died, about two hundred were injured and maimed, and some children witnessed their parents die from injuries or fires. We already know what a humanitarian catastrophe is, when the attackers don’t allow people to leave the city, when they shoot evacuation corridors, when they don’t allow food and medicine to be brought to the occupied cities. Mariupol, Chernihiv, Sumy, Kharkiv, Irpin and many other Ukrainian cities and villages are now a great pain for Ukraine, as well as for all humankind and the modern world. We also now know what nuclear terrorism is. Dozens of hospitals, schools, cultural institutions, sacred buildings, historic buildings, memorials, cemeteries and hundreds of residential buildings in various cities of Ukraine were destroyed or damaged – apocalyptic pictures, like in the movies, although Ukrainians have not watched movies for a long time… There are cases where the seizure and destruction of Ukrainian books by Russian side was recorded in Luhansk and Chernihiv regions. Yes, we are still in Europe and this is the XXI century!..

At the same time, over the last month, we have seen very closely and clearly what heroism truly is. Mariupol, Chernihiv, Sumy, Kharkiv, Irpin, as well as Kherson, Kyiv, Enerhodar, Nova Kakhovka, Novotroitske and many other Ukrainian cities and villages are also great pride of Ukraine. It is the personification of resistance and protection of truth, justice and freedom – despite everything. Over the last month, we have realized what an irresistible force the unity of citizens is, what it is like to share your time, home, resources – for a common victory. And we also know how important the support of Ukraine and Ukrainian people in the world is!

International charity concert-marathon “Save Ukraine – #StopWar” will take place on Sunday, March 27, It will be broadcasted by TV channels of 20 European countries. 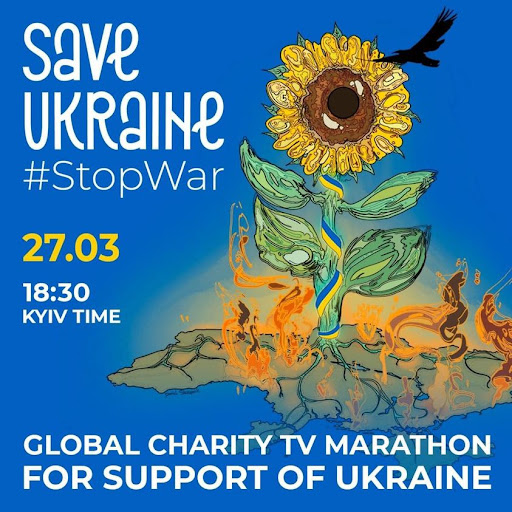 “From Lviv to the Urals” – protest of Ukrainian artistic community

In Nantes, France, russian cinema festival “Univerciné russe” is going to happen. The motto of the festival is “From Lviv to Ural”, says Iryna Tsilyk, ukrainian film-maker and writer on her Facebook.

Besides, Ukrainian Movie Academy prepared official statement with the appeal to reconsider the vector of the event, to change the name “From Lviv to the Urals”, “as such positioning levels the borders of sovereign Ukraine, is incorrect and does not correspond to geographical and historical reality”, and to stop cooperation with Russian cinema.

“We ask the whole world to border Ukrainian and russian cultures and not to equal them. Especially now, as Russia is waging war on Ukrainian territory and destroying lifes of Ukrainians, their houses and cultural heritage.

According to what previously said, we ask You to reconsider the vector of the Univerciné de Nantes festival. We support Your initiative to demonstrate Ukrainian movies on festival, but we propose to fulfill all program with the movies produced in Ukraine or about Ukraine, separating our culture from russian cinema, that continues to sponsor teroristic regime of Vladimir Putin.

Also we urge You to change the name “From Lviv to Urals” as this positioning levels the borders of sovereign Ukraine, is incorrect and doesn’t answer neither geographical nor historical reality. Ukrainian and Russian cities categorically can’t be used in a single title.

And, what is the most important – we ask You to refuse cooperation with Russian cinema, as leading European film academies and organizations have done and continue to do. At least as long as Russia’s war against Ukraine continues and as long as Russia does not pay all reparations for the damage done to Ukraine. Now the aggressor must find himself in complete economic and cultural isolation. Only by joint efforts will we be able to stop it, and thus protect not only Ukraine but also Europe and the world” (From the statement). 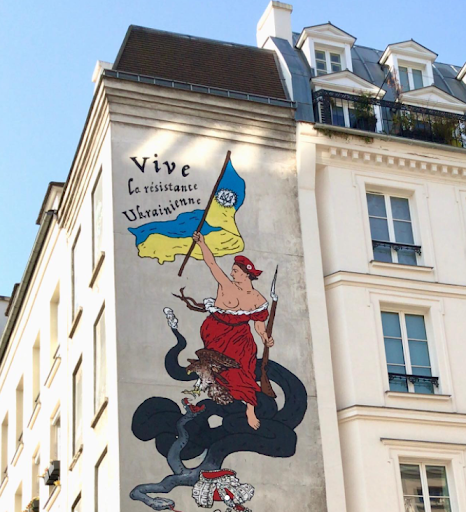 “Cancel Russian culture as a tool of self-preservation”

Over the past four weeks, many cultural institutions and cultural actors around the world have expressed and continue to express their support for Ukraine and Ukrainian people in the war that the Russian Federation has started on Ukrainian territory. During this time, which has changed the world of every Ukrainian, Ukraine has called on the international community to impose sanctions on Russia not only in the economic, political, diplomatic spheres, but also in a cultural field. Many well-known institutions in different countries have stopped cooperating with Russian artists who have not condemned Putin’s aggression against Ukraine, refused to participate in Russian film festivals and book fairs, will not renew contracts for Russian translation, and world brands in culture and creative industries entertainment comes from Russian.

Why is Ukraine and the Ukrainian cultural community calling for a boycott of Russian culture? Why is Russia’s war against Ukraine neo-colonial? Why is the dialogue of Ukrainian intellectuals with Russians not possible now? Volodymyr Sheiko, Director General at the Ukrainian Institute in his article “Cancel Russian culture as a tool of self-preservation” wrotes:

“…Ukraine’s arguments are irrefutable: Russia has waged an unjustified war against a sovereign state, it grossly violates international law, cynically kills thousands of innocent people, and deliberately destroys the architectural heritage of Ukrainian cities. Under such conditions, any cultural cooperation with the aggressor makes its crimes a norm and creates for Russia new platforms for self-presentation. In its appeals, the Ukrainian Institute emphasizes that for decades Russia has used culture as a tool for political propaganda, whitewashing its international reputation, distracting the world community from war crimes against other countries, and establishing imperial and colonial hierarchies in the world humanities.

…The metaphor of “great humanistic Russian culture” finally ended on 24 February 2022, when the first bombs fell on Ukrainian cities. However, sentiment towards Tolstoy, Dostoevsky, Shostakovich or the so-called “Russian avant-garde” still is flourishing in the minds of millions of foreigners who still believe that culture can be separated from politics and the responsibility for the war can be placed on a single dictator. 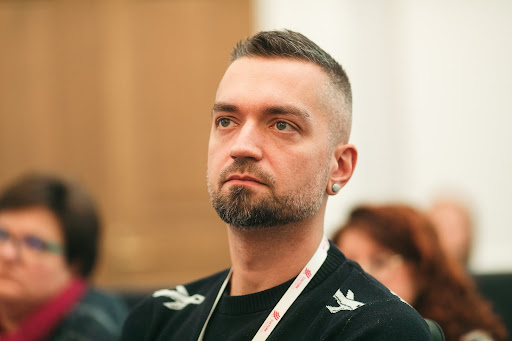 …the international community must finally understand that Russia’s war against Ukraine is neo-colonial, and Ukraine’s centuries-long struggle for independence is decolonization; and these existential tasks will always be mutually exclusive. Ukraine is fighting for its independence not only with weapons; therefore the cultural frontline is no less important than the military one.

…The starting point of any reconciliation with Russia is far in the future: when Russia completely leaves the territory of Ukraine, including Crimea and Donbas; is held accountable for war crimes at an international tribunal and pay reparations to Ukraine; when the Putin regime falls and the next democratically elected government, the remnants of civil society and the media unanimously acknowledge and apologize to Ukraine for all its crimes; when Russian society is able to critically consider its defeat and draw conclusions from it.

…Of course, this scenario sounds too fantastic, but it does not mean that Ukraine has to agree to compromises today. Any accelerated or premature reconciliation with Russia is extremely dangerous. It will be a new era of recolonization of Ukraine, where the discourse will be the same, following the old rules and using the old structures.”

A full text of the article “Cancel Russian culture as a tool of self-preservation” is on Lb.ua media. 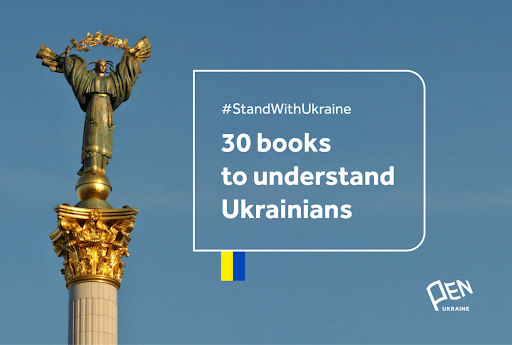 What do you know about Ukrainians? For the last ten years, Ukraine has been published on the covers of world newspapers with the headlines “Revolution of Dignity” and “War”. These events proved that freedom is the key value of the Ukrainian people. Why do Ukrainians continue to fight for their values, despite the aggression of one of the largest countries in the world?

We have compiled a list of fiction and non-fiction books that will help you better understand Ukrainian history and mentality. All books are available in English.

A source to know the situation in Ukraine now is an English-podcast “Explaining Ukraine” (Ukraine World) hosted by Volodymyr Yermolenko, a Ukrainian philosopher, an analytics director at Internews Ukraine, and Tetyana Ogarkova, a literary critic, from the Ukraine Crisis Media Centre. You can listen to the podcasts on the web site and on Soundcloud, Google podcasts, Apple podcasts, YouTube too. For example, among the latest episodes – Ep. № 83: One month of war: 10 lessons learnt, Ep. № 81: Ten things to know about Ukraine and its culture. The Guardian recently recommented the podcast among top 6 podcasts about the war of Russia against Ukraine.

Ukrainian Witness: the chronicle of the Ukrainian resistance

Ukrainian Witness is the chronicle of the Ukrainian resistance to Russian aggression. This are video documents of the epoch. Here ate such topics as “Mariupol today”, “How not to go crazy during the war”, “Rock stars protect Kyiv” etc. The media resource is on Youtube and on Facebook. 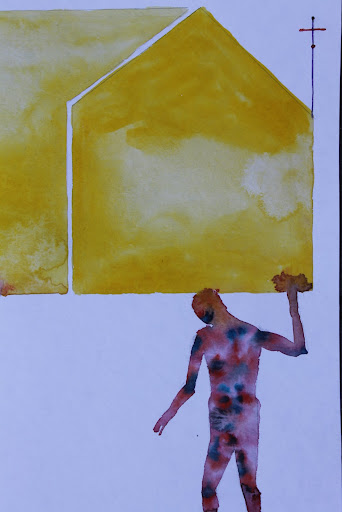 Being together
Scroll to top