In our country – Ukraine – we, civilians, are forced to risk and to face the Russian military demanding to go away – how it was in Berdiansk today.  Now we have to… no! we are forced to hide in shelters from bombs several times a day and night. We are forced to leave our homes and become refugees. And the worst is that we lose the lives of Ukrainian people because of the war, which the Russian Federation opened out against Ukraine – at least 352 Ukrainians have died, 2040 people have been injured…

Here upon we are forced to protect our cultural heritage, because the aggressor can destroy it – as Maria Prymachenko Museum in Kyiv region was destroyed and Lysohub’s family country seat in Chernihiv region was robbed. And we worry about our nature and the future of Europe and all humankind after Russian troops took over the Chornobyl nuclear power plant, the site of a 1986 nuclear disaster.

We thank the whole civilized world, foreign governments and each person for supporting us, Ukrainian people, in different ways. Our struggle, that lasts the 5th day, is a struggle for our common future as an independent world, where every human life is valuable, and the principles of peaceful coexistence are inviolable!

Today, February 28th, the world heard about the destruction of the Maria Prymachenko Museum in Ivankiv – a prominent world-renowned naїve artist. 2009 was declared by UNESCO as the Year of Maria Prymachenko. Information on the number of survived works is still to be clarified, however this is an irreparable loss for the historical and cultural heritage of the world.

The Minister of Culture and Information Policy of Ukraine Oleksandr Tkachenko appealed to UNESCO to deprive Russia of the status of UNESCO member and change the host country of the 45th session of the World Heritage Committee. Since 2014, Russia has been systematically violating international humanitarian law and international conventions on the protection of cultural heritage, particularly on the Crimean peninsula. Its actions have already damaged the ancient city of Tavrian Chersonese. According to Ukrainian law, deliberate destruction of cultural institutions is classified as a criminal offense under Article 298 of the Criminal Code of Ukraine; according to the Rome Statute of the International Criminal Court – war crime.

We do expect that the Ukrainian side will receive an answer and a decision on this issue as soon as possible. 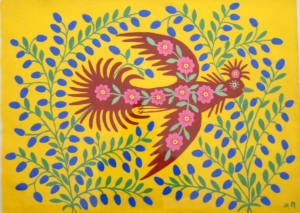 The Ministry of Culture and Information Policy of Ukraine demands to add cultural sanctions among political, economic and sports one, thus to limit the cultural presence of the Russian Federation in the international arena.

On behalf of Ukraine and partner countries, which uphold humanism, peace and orderliness in the world, the Ministry claims:

cancel all projects Russia is involved in, and projects that have funding of Russian origin, ban the work of Russian cultural centers in the territory of partner countries, and refuse sponsorship and organizational support. Also cancel Russia’s participation in international festivals, exhibitions, forums and art events, including the Venice Biennale, Cannes Film Festival and others (as it is already canceled in Eurovision and Frankfurt Book Fair).

By this time we’ve got 1400 signatories. Join and sign the petition here (also available in German, French, Italian and English). 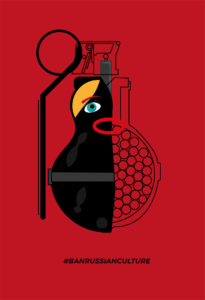 The Ukrainian Film Academy, the membership body of film professionals and cultural figures from across the country, has released a petition calling for an international boycott of Russian cinema. Specifically, the letter asks the Council of Europe to exclude Russia from funding body Eurimages as well as the European Convention on Cinematographic Co-Production, and for the International Federation of Film Producers Associations to deprive the Moscow International Film Festival of accreditation.

Finally, it asks the European Audiovisual Production association аnd the European Federation for Commercial Film Producers to cease cooperation with “audiovisual producers who support aggression against Ukraine”. Read about the petition on change.org here.

Opposition to Russian culture is taking place in the Ukrainian culture field – a petition for reorganizing The Lesya Ukrainka National Academic Russian Drama Theater is underway  right now. It is an old-established symbol of the aggressor country, which systematically violates the Law of Ukraine “On Ensuring the Functioning of the Ukrainian Language as the State Language”. #banrussianculture is an ongoing movement for protecting Ukraine from russia-related culture.

How you can help Ukraine and a future

– Another restless night (and restless day)

During the last day the sirens can be heard in Kyiv, Poltava, Vinnytsia, Dnipro, Chernihiv, Kharkiv, Zhytomyr, Cherkasy, Khmelnytskyi Okhtyrka, Pryluky, Mariupol… The citizens were forced to hide in shelters. In various cities, residential buildings and civil infrastructure are destroyed or damaged, there were several fires. So, in Chernihiv, as a result of night attacks by the Russian military the apartment house, kindergarten, shop burned.

– On the verge of a humanitarian catastrophe

Shchastia and Stanytsia Luhanska (Luhansk region) are on the verge of a humanitarian catastrophe. The towns are occupied and almost destroyed, having been almost leveled to the ground by Russian invaders. Private houses and flat blocks, as well as important infrastructure have all been severely damaged by shelling. Citizens of these towns have been sheltering in basements for days. The local authorities said they can’t evacuate the civilians or even bring them bread and water. This morning Mariupol and Volnovakha remain the hottest spots in the Donetsk region.

– The situation in Chornobyl

The Chornobyl nuclear power plant was captured by Russian troops on February 25. Monitoring data showed a radiation spike in this territory the next day, caused by movement of a large number of heavy machinery. The condition of Chornobyl nuclear facilities and other facilities is unchanged, Ukraine’s State Nuclear Regulatory Inspectorate reported.

The Russian occupiers threatened to blow up some of the infrastructure of the Chornobyl NPP. Violation of the integrity of the New Safe Confinement at the NPP (a structure confining the remains of the number 4 reactor unit at the Chernobyl NPP) could lead to the release of radioactive dust into the environment, which mean danger for a local Chornobyl and Exclusion Zone workers, pollution of Pripyat and Dnipro rivers and agricultural lands, scientists explain.

Voices of the world

Jim Carrey, actor: It breaks my heart to see innocent people (especially children) put in harm’s way by yet another of history’s grandiose political jerks. Beware the unloved.

Ryan Reynolds and Blake Lively,  actors, announced Saturday on their social media pages that they are pledging to match donations, up to $1 million, to support refugees. “In 48 hours, countless Ukrainians were forced to flee their homes to neighboring countries. They need protection,” Reynolds tweeted.

To our friends and colleagues in Ukraine,
We, writers all around the world, are appalled by violence unleashed by Russian forces against Ukraine and urgently call for the end of bloodshed. We stand united in condemnation of a senseless war, waged by President Putin’s refusal to accept the rights of Ukraine’s people to debate their future allegiance and history without Moscow’s interference. We stand united in support of writers, journalists, artists, and all the people of Ukraine, who are living through their darkest hours. We stand by you and feel your pain.
All individuals have a right to peace, free expression, and free assembly. Putin’s war is an attack on democracy and freedom not just in Ukraine, but around the world. We stand united in calling for peace and for an end to the propaganda that is fueling the violence. There can be no free and safe Europe without a free and independent Ukraine.
Peace must prevail. 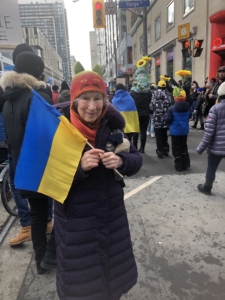 Over 100000 people marched in Berlin, supporting Ukraine. The crowd of protesters bearing signs reading: “Stop the War”, “Putin’s last war” and “We stand with Ukraine” along with Ukrainian and European Union flags, extended from the Victory Column in the heart of the capital. 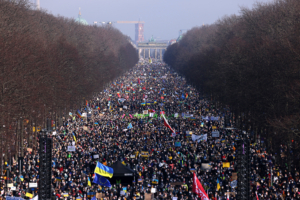 We have a great video: French artists express support for the Ukrainian people! Merci la France! 💗