You are here: Home / News / Ukraine / The frontline festival in Donetsk area has its contunuing in the heart of Lviv

New York Literature festival was held in October, 2021 in the frontline village New-York in Donetsk area. This winter is will be continued in Lviv - in frames of the "Winter Together: Metting with the New Yorkers" project.

This educational trip is an award for winning the essay competition "Looking for true stories". Five winners were announced by Lviv writer Victoria Amelina earlier this autumn.

Talanted pupils will visit winter Lviv, and, most important – will have an informal talks with those, who succeeded in Lviv and Ukraine. Among them, main editor of "The Old Lion" publishing house Mariana Savka, actor Oleg Onyshchak, literature scientist and professor Iryna Starovoyt, co-founder of EdPRo IT-company Natalia Tabachyn, program director of Lvivi Book Forum Sofia Chelyak and many others.

All five winners, that will soon visit us, are very different, but most of them have their main interest in literature and art. They want to be journalists or psychologists in the future and had never visited Lviv before. Two girls were born in Donetsk, but after the occupation moved to the Ukrainian side – to the New York village a few kilometers from the line of demarcation. The youngest participants of 13 years old, which means that in fact all their conscious life they lived alongside the front line”, the organizers explained.

On Tuesday, January 13., our guests are having an event in Dzyga. Kids will read the piecese of their essays, describing their village, families and, of course, experience of the war. Participants of the event are also: Mark Tokar, famous musician, poets Halyna Kruk, Ostap Slyvynsky, Kateryna Mikhalitsyna and Oleksiy Chupa. 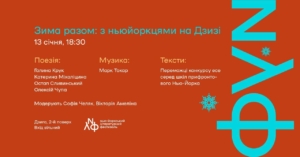 The organizers hope that talanted kids grown up in the borderline village, will feel that they are pleased here.

Lviv tours will be held by Maxim Martyn, who is not only the historician, but who protected Ukraine as a part of Ukrainian Armed Forces under Mariupol.

Voices of the teenagers from Donetsk will also be heard on Radio Culture, Hromadske Radio and Radio Svoboda.

Project "Winter Together: Meeting with the New Yorkers" is a part of The New York literature festival 2022.