Ukrainians continue to call on NATO to establish a no-fly zone over Ukraine to help save the lives of people. So, according to preliminary data, within the 10.5 days of the Russian invasion, 38 Ukrainian children were killed and 71 injured by Russian shelling. Source: Ukraine’s Ombudsperson Ludmyla Denysova. 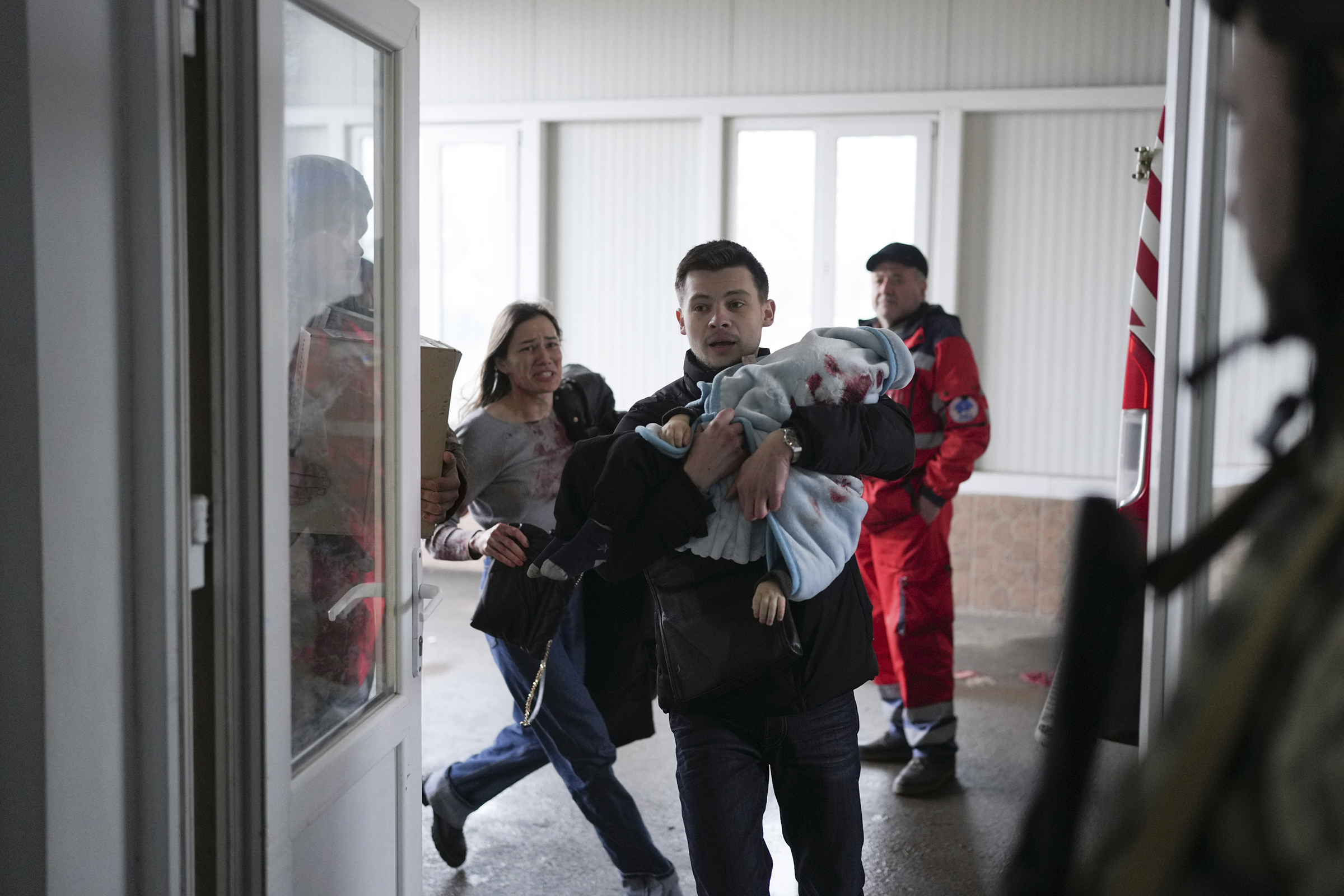 Marina Yatsko, left, runs behind her boyfriend Fedor carrying her 18 month-old son Kirill who was killed in shelling, as they arrive at a hospital in Mariupol, Ukraine, Friday, March 4, 2022. (AP Photo/Evgeniy Maloletka)

The Russian occupiers in Ukraine have shut down 34 hospitals, the Ministry of Health said. Some hospitals have their buildings destroyed, some are being left with no water or electricity supply, and some are not able to work at all. 6 medical workers died.

Hundreds of thousands of Ukrainians require immediate evacuation. Cities, towns, and villages in Sumy, Chernihiv, Kharkiv, Kyiv, Mykolayiv, Zaporizhzhya, Kherson, Luhansk, and Donetsk regions are in the most need of access to humanitarian corridors. The agreements between Ukrainian and Russian sides about humanitarian corridors from Mariupol and Volnovakha were broken by the Russian side. The citizens are in very difficult circumstances.

At least 1.2 million refugees have fled Ukraine since the beginning of the invasion, the UN estimates. 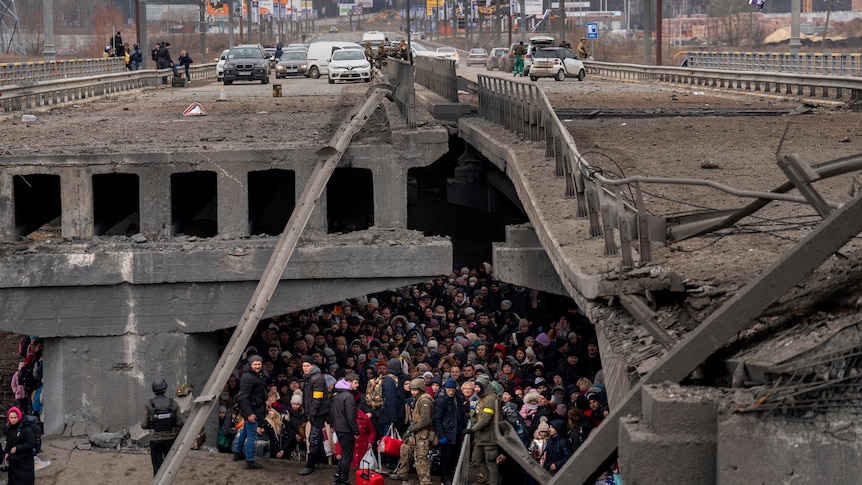 The Ukrainian cities that suffered the most from the Russian invasion have been graced the Hero-cities status. These are Kharkiv, Chernihiv, Mariupol, Kherson, Hostomel, Volnovakha. So, in Kherson, hundreds of people went to a peaceful meeting carrying Ukrainian flags, to show the Russian military  that they are the occupier and no one was waiting for them here. 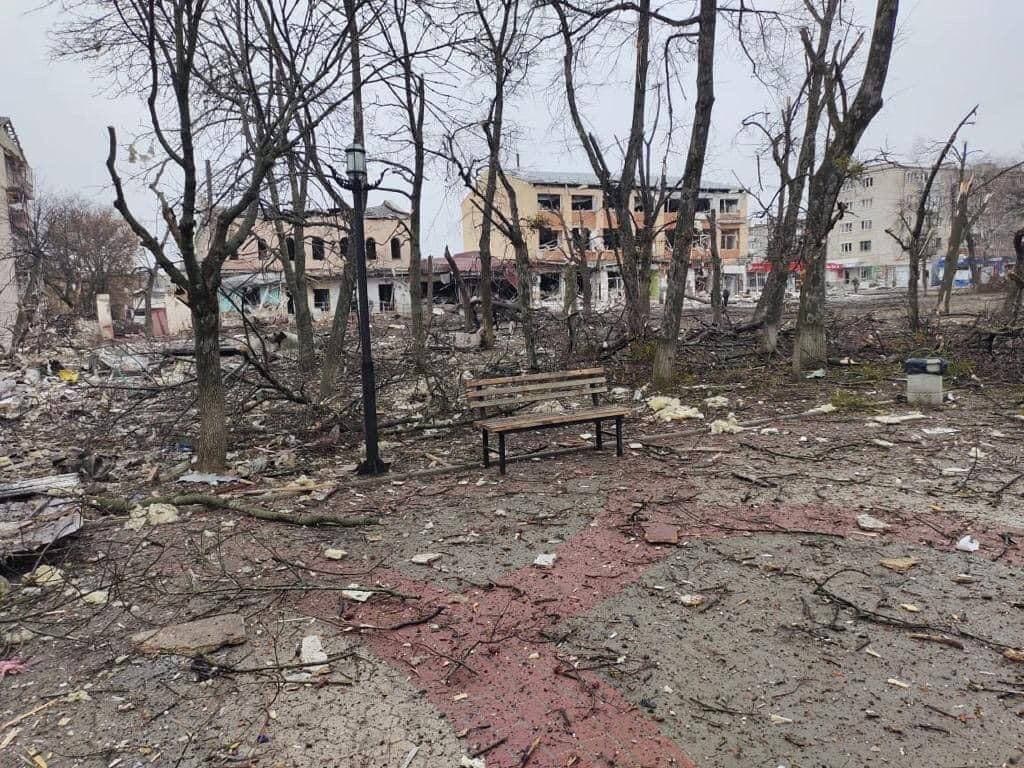 Today, on March 7, the hearings under Ukraine’s lawsuit against Russia in genocide case have been commenced at the UN International Court of Justice. The delegation appeals to the UN ICJ to impose the following precautionary measures in this case, in order to stop the bloodshed: the Russian Federation must immediately stop the hostilities which have been started on the territory of Ukraine dated February 24, 2022; the Russian Federation must make sure immediately that every military and any other armed formations under its authority, supervision or influence stopped to engage the hostilities.

“We Are All Ukrainians Now”

Tens of thousands join rallies around the world in support of Ukraine. Demonstrators gathered in cities across Europe, the US and South America to demand an end to Russia’s invasion

“We Are All Ukrainians Now” – these words belong to Adam Michnik, journalist, editor-in-chief of the Polish newspaper, Gazeta Wyborcza. The author wrote:

“Putin’s thuggish attack is reminiscent of tactics used by Hitler and Stalin. The Russian president also reaches extensively and shamelessly for rhetoric used by the most notorious totalitarian regimes of the 20th century.

…Ukrainians are possibly the most unlucky nation in Europe. Despite their stubborn, heroic, years-long struggle, they have never managed to create and protect their own state. They were the victims of Russification and deprivation, discrimination and repression, they were imprisoned and tortured. They were victims of the great famine and the Stalinist terror of the 1930s. They died at the hands of the Nazi occupiers and later at the hands of Stalinist oppressors.

And in every generation, they have always repeated that “Ukraine is not yet lost”.

…We must say it loud and clear – we are all Ukrainians now. In Warsaw and in Paris, in Berlin and in Prague, in London and in Budapest, one thing must be said loudly: today, Ukrainians are not only fighting for themselves; they are fighting “for our freedom and yours”. 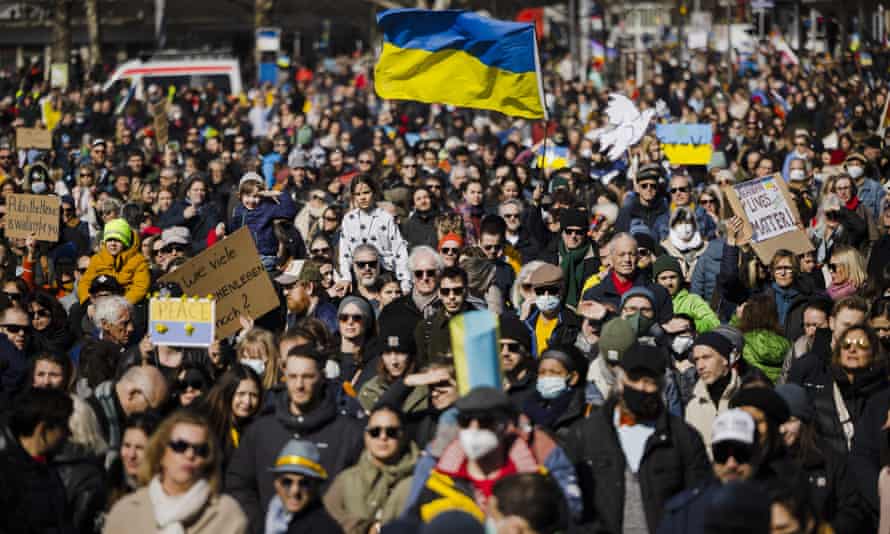 Among those who are with us in our struggle against the Russian aggressor are many Belarusians who now live in Ukraine and outside Belarus. They fight alongside the Ukrainian military, volunteer, help refugees, donate, join actions in support of Ukraine… And for us, these people are the true Belarus! In his open letter Belarusian opposition writer and translator Alhierd Bacharevič explains his personal pain over and guilt for the war on Ukraine, but also that of his compatriots, and the difference between Lukashenko’s regime and Belarus which a lot of Belarusians struggle for.

“…The essential difference is that those who dream of another Belarus, who for years have been trying to make that dream become a reality are conscious of an immeasurably greater, more powerful affinity with you [Ukrainians] than with all those generals and soldiers of ours [Belarusians] who have now invaded your territory. …You Ukrainians are defending your country. Your regular army, your territorials, every Ukrainian man and woman are standing together to repel the invaders. Your war is one of defence and liberation. Your road to freedom has already made it abundantly clear that Putin’s Empire will never be able to claim you back in its prison. Ukraine has already changed for ever.”

A group of eminent writers has appealed to Russian speakers around the world to convey the truth about the war in Ukraine by directly contacting Russian citizens using “all possible means of communication”. It comes as the Russian government cracked down on access to news and information about the invasion of Ukraine by blocking media resources (like BBC, Radio Liberty, DW). The appeal was signed by 17 authors, including Belarusian writer Svetlana Aleksievich, Russian authors Lyudmila Ulitskaya, Lev Rubinstein and others.

Kaunas 2022 – operator-organization for “Kaunas – European Capital of Culture 2022” programme. It has supported Ukraine even before the russian invasion started. Kaunas 2022 are now reviewing annual events programme and cut the connection with both russian and belarussian cities, organizations and individual artists, also actively participating in volunteering, fundraising to support Ukrainian Army and refugees. 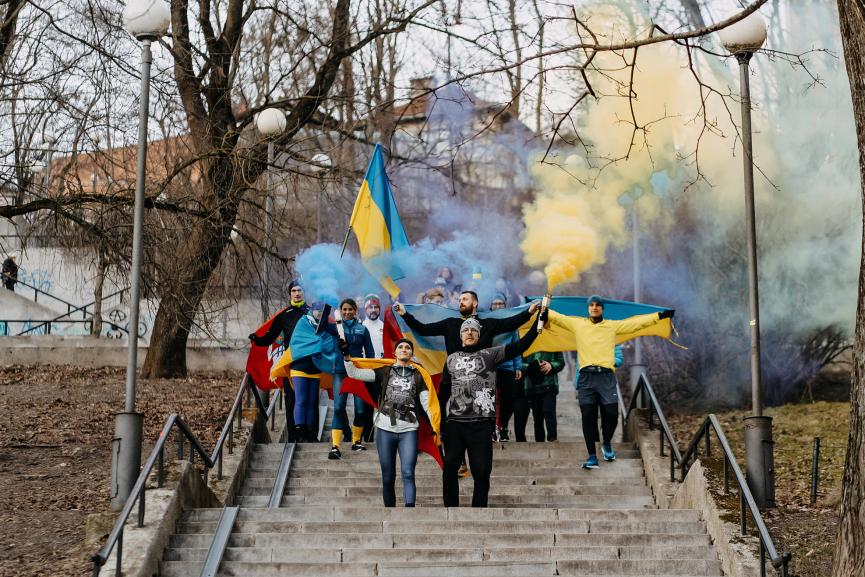 In the first days of war Kaunas 2022 called on every russian woman to sing in the petition to stop the war:

“Mothers, wifes, daughters and sisters of Russia, we invite you to, together with women all around the world, resist what is now happening in Ukraine. Be bold to change your silence and indifference, spotted with the blood of Ukrainian kids, to courage and firmness to fight for all of our kids!” – said the ambassador of Kaunas 2022 Dovilė Filmanavičiūtė.

Also lots of European Culture Capital programmes were canceled or directed to support Ukraine, for example the Happiness Day celebration is canceled, as far as happiness, according to what organizers said, is a deficit now. Costs, raised from tickets to Marina Abramovich lecture (serbian artist), will be directed to Ukrainian Culture Programme, supporting artists that arrived in Kaunas as a short-time refugees.

NB: earlier Serbian artist appealed to the public with the call to support Ukrainians and stop putin’s regime.

“The wars are different but the outcomes are the same. Just as we unified to defeat the insane Nazi regime, the world musr come together in the aid of Volodymyr Zelenskiy and the brave men ans women of Ukraine”, – said Abramovich. She also shared her thought in the following video. 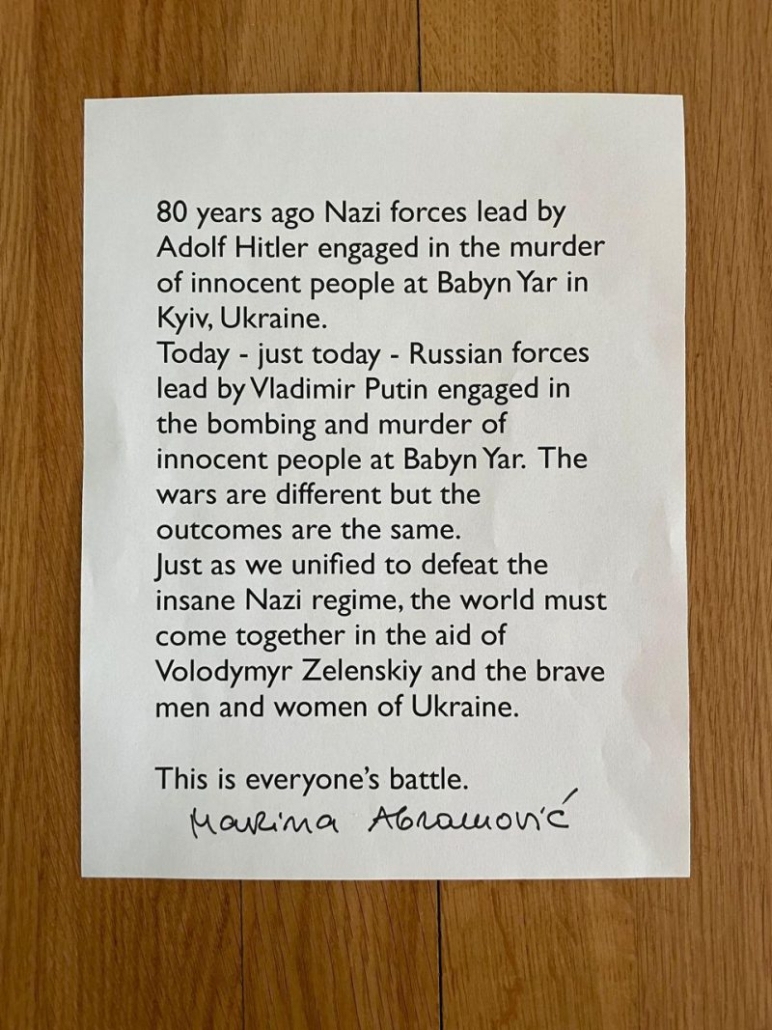 The Come Back Alive foundation. 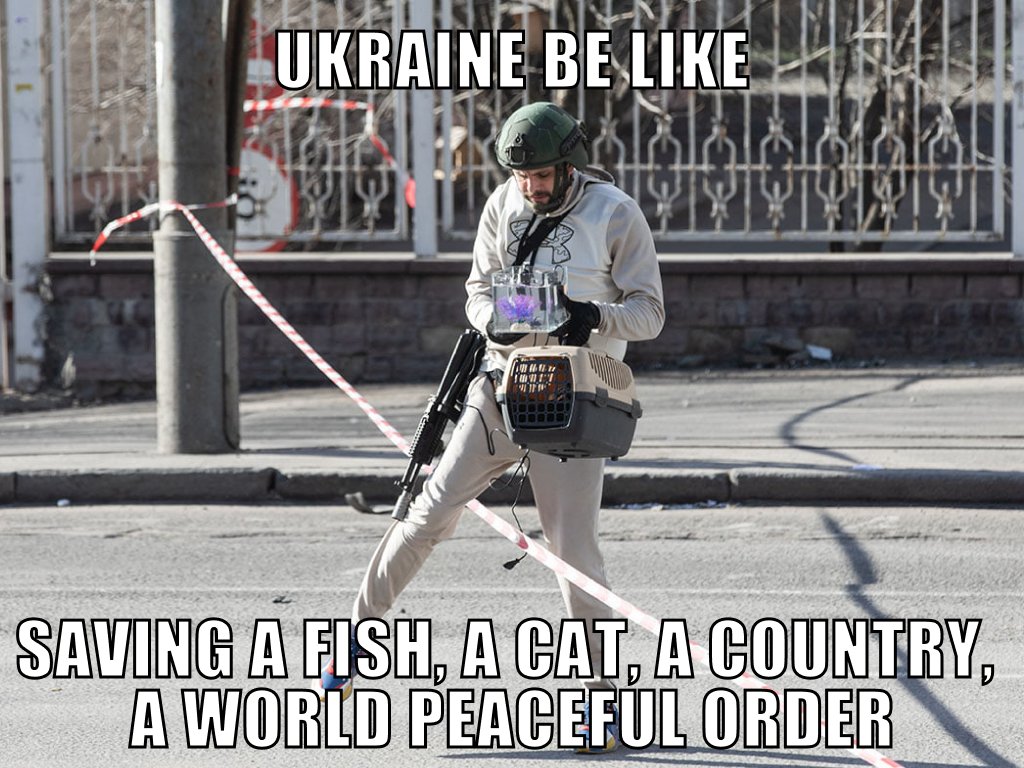 “Struggle on – and be triumphant!”
Догори